Nu Flow Technologies specializes in small-diameter pipe restoration, a market that encompasses both public and private systems. Smaller diameter piping ranges in size from 1/2″ to about 10″, with larger custom diameters available as requested.

The market for pipe repair and rehabilitation is large and growing. Based on U.S. EPA analyses, the public and municipal small diameter distribution systems market is estimated to be more than $3.9 billion per annum. The market for infrastructure repairs to private plumbing systems is estimated to be as much as “5 to 10 times larger” – an additional market opportunity of as much as $39 billion per annum.

Statutory enactments in the 1970s and 1980s mandated the adding of disinfectant chemicals to make our drinking water safer, but which those chemicals also erode and cause aggressive corrosion in metal piping systems. Metal piping systems with a design life of 30 years have rapidly deteriorated since the 1970s. 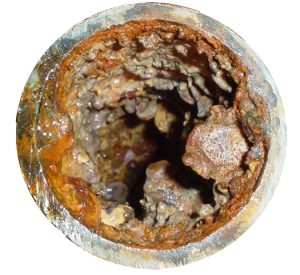 In fact, newly installed piping systems can fail in as little as two to five years based not only on corrosive chemicals but factors such as outdated and inferior industry practices, pH levels, hard water and mineral content and frequent hot water temperatures. Based on 2004 infrastructure conditions, experts estimated that private piping systems (pipe that runs from the street curb into and throughout building structures) would cost as much as $77 billion to repair over the next twenty years. Experts in some studies estimate indirect repair costs for reconstruction of damaged access points and facades will likely increase direct repair estimates by as much as 40% to 60%.

In the private market sector, the small diameter pipe lining market has been almost exclusively serviced by plumbing and mechanical engineering contractors repiping old pipe systems. However, since early 2000, pipe lining companies have emerged with a more practical and  cost-effective alternative to traditional replacement. ‘Rehabilitation’ versus ‘replacement’ is a recurrent theme in reports and studies conducted by private and governmental authorities tasked with finding solutions to infrastructure failure. 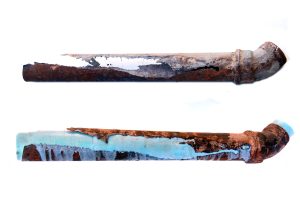 Nu Flow Technologies’ pipe restoration technology is an eco-friendly solution that creates no waste for landfills or recycling and does not generate carbon emissions during manufacturing. Traditional pipe replacement creates tremendous amounts of waste and requires equal amounts of new building materials. By retrofitting existing pipes with a structural liner or epoxy coating, Nu Flow saves the existing infrastructure and greatly extends its useful life without digging and destruction of existing landscapes and hardscapes or interior walls and ceilings.

These solutions also have environmental and health benefits. In sanitary systems, lining stops leaks and breaks that otherwise cause pollution to watersheds and contamination of groundwater. Lining also prevents inflows and infiltration into sewer systems, which reduces the load on wastewater treatment facilities. In potable water systems, epoxy pipe coating prevents heavy metals and lead from leaching into drinking water. No matter where the system exists, Nu Flow Technologies’ solutions protect property and environment from the destructive impact of a leak.

Nu Flow Technologies’ pipe rehabilitation eliminates corrosion and restores pipes to more efficient operation. By eliminating leaks, Nu Flow Technologies saves water in potable systems and other pressurized mechanical systems that otherwise need a steady supply of make-up water. A less obvious benefit is that by eliminating leaks and removing corrosion, this solution can reduce demand on pumps and thus save electricity. Even in compressed air systems, where significant amounts of pressure can be lost through a small hole in the pipe, a rehabilitated pipe leads to reduced demand on the air compressors, which also saves electricity.